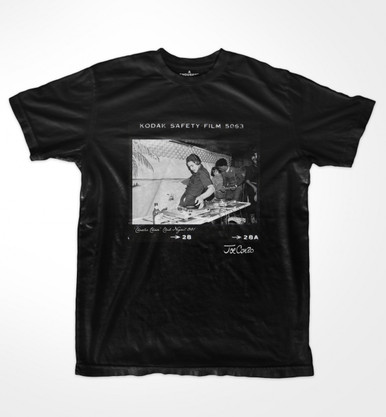 Charlie Chase was one of two DJ’s --the other DJ Tony Tone-- that rounded out the legendary rap group the Cold Crush Brothers. This classic shot captured in 1981 by renowned Bronx photographer Joe Conzo shows Charlie showboating during the Cold Crush Brothers first performance at Club Negril.  Michael Holman of Graffiti Rock fame established the East Village venue as the first Hip-Hop nightclub in Downtown New York. All ATW Joe Conzo products are fully licensed and made from premium soft combed cotton jersey. Proceeds from this shirt will be donated to the Bronx Documentary Center (BDC), a non-profit gallery and educational space devoted to documentary projects from around the globe. The BDC aims to create an engaging environment for local and international photojournalists, artists, filmmakers, critics and educators committed to innovative methods of non-fiction storytelling. For more on Joe Conzo visit www.joeconzo.com.

Joe Conzo - Old School Hip Hop Photo Legend (06:53)
Back in the 70s, Joe Conzos pictures were part of Hip-Hop. 30 years later, his pictures are part of Hip-Hop history. Born February 6, 1963 and raised on the tough streets of the South Bronx, Joe was definitely at the right place at the right time. Strapped with a camera 24/7 during the late 70's and early 80's, he intimately captured the birth of Hip-Hop music and a culture that would forever change the world. Having attended school with some of the pillars of Hip-Hop, such as The Cold Crush Brothers, Joe was never too far from a classic shot. He would go on to be the Crushs exclusive photographer and record some of the most candid and exhilarating moments of the pioneering rap group to date. With the help of True School flyer king Buddy Esquire, those photos and many others would soon grace party flyers and event posters and act as the earliest forms of Hip-Hop marketing and promotion. In addition to the Cold Crush, he documented other legendary Hip-Hop groups like the Treacherous 3, Fearless 4 and Fantastic 5 in famed venues such as The T-Connection, Harlem World, Ecstasy Garage and The Roxy. Many luminaries, like Kool Moe Dee of the Treacherous 3 and Rahiem of the Furious 5 consider Joe to be one of the first Hip-Hop photographers. But Joes photographic contributions to urban culture werent limited to just Hip-Hop. Being the grandson of the late "Hell Lady of the Bronx" Dr. Evelina Antonetty, Joe also documented the political and socio-economic conditions that played a great role in the late 70s, early 80s South Bronx. Joes dad, Joe Conzo Sr. acted as confidant and historian of late "King of Latin Music" Tito Puente. Joe Sr.s unique position allowed his son exclusive access to some of the most influential names in the world of Latin Music. Salsa greats like Hector Lavoe, Tito Puente, Celia Cruz, Johnny Pacheco and Ray Baretto were brilliantly shot by Joe as they shaped the face of Latin Music. As fate would have it, Joes success and popularity would come to a screeching halt, as Joe unfortunately became a product of the harsh environment in which he shot. During a battle with drug addiction and in search of personal and professional growth, Joe would disappear off the photographic radar for nearly 2 decades. Today, Joe is a 14-year veteran of the New York City Fire Dept., working as an EMT and rediscovering his love for photography. Joes work has appeared on VH1, featured in a highly acclaimed New York Times article and has appeared in publications such as VIBE, The Source, Hip-Hop Connection (Europe), Urban Hitz (Australia), Esquire and Wax Poetics. His work was also featured in the books Hip Hop Immortals, Yes, Yes, Yall and displayed at the prestigious Schomburg Center for Research in Black Culture in New York. In addition, Joe and his work are part of a world tour surrounding his highly successful, Born In The Bronx photo retrospective with a book of the same name to follow in 2007. Conzo concedes, Photography has changed so much. No more darkrooms, no more chemicals, nothing but computers and digital cameras. Joe mightve made way for new technology and advanced hardware, but I guess that aint too bad when youve already made history.