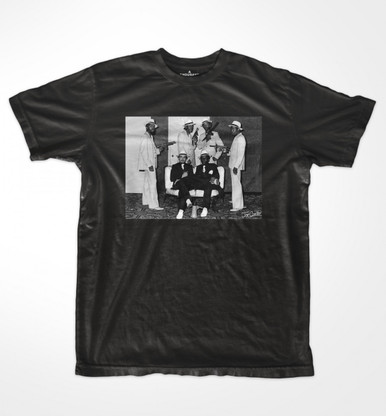 On July 3, 1981 at Harlem World club in New York, pioneering rap group the Cold Crush Brothers engaged in a fierce lyrical battle with then rivals, The Fantastic Five. The groups squared-off for a $1,000 cash prize and it's said that the Fantastic Five won the battle but the Cold Crush Brothers won the war. This classic photo of the Cold Crush Brothers captured by famed Bronx photographer Joe Conzo was taken during the battle and says much about that legendary moment in time. All ATW Joe Conzo products are fully licensed and made from premium soft combed cotton jersey. Proceeds from this shirt will be donated to the Bronx Documentary Center (BDC), a non-profit gallery and educational space devoted to documentary projects from around the globe. The BDC aims to create an engaging environment for local and international photojournalists, artists, filmmakers, critics and educators committed to innovative methods of non-fiction storytelling. For more on Joe Conzo visit www.joeconzo.com.