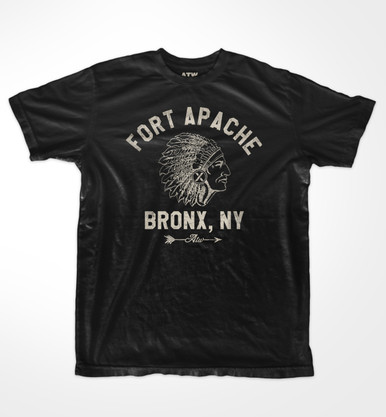 Our Fort Apache tee pays homage to the legendary 41st police precinct formerly located at 1086 Simpson Street in the South Bronx, NY. Starting in the early 1960's, the precinct led or was near the top of the city for crime and homicides. The precinct, which acted as a sanctuary for many of the impoverished people of color in the neighborhood, is said to have been named after the 1976 book, "Fort Apache," by Thomas Walker. A former officer, suggests that it was coined in the early 70's during a protest at the station house. The precinct (and the plight of the South Bronx) was brought to the world's attention in 1981 when the feature film "Fort Apache, The Bronx" starring Paul Newman was released.

All prices are in USD. Copyright 2020 A THOUSAND WORDS. Sitemap | Shopping Cart Software by BigCommerce