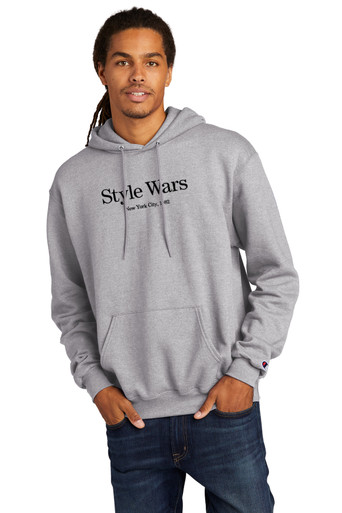 Nothing says classic Hip-Hop like the documentary film, Style Wars. When director Tony Silver and co-producer Henry Chalfant delivered the broadcast version of their prize-winning film to PBS in 1983, the world received its first full immersion in the phenomenon that had taken over New York City. We are honored to collaborate with visionary documentarian Henry Chalfant to offer exclusive Style Wars tees and wall art. Printed on a premium Champion Adult Double Dry Eco® Pullover Hood with "C" logo at left cuff, our Style Wars hoodie features the classic Style Wars logo and "New York City 1982" screen-printed at the center front and actual film credits on the back. This Limited Edition "83" piece bundle celebrates the 40th Anniversary of the filming of Style Wars and includes an official Style Wars mixtape by world renowned DJ Neil Armstrong. The mixtape is loaded on a special USB cassette tape with all of the classic hits from Style Wars, including a bonus track "Live Convention '82" by Busy Bee & E-Man that was heard during the playground breaking scene with the Rock Steady Crew. The mixtape is hosted by Hip-Hop historian and ATW owner Koe Rodriguez and features Style Wars alumni: Henry Chalfant, Skeme TMT, Dez aka DJ Kay Slay and Mr. Freeze of the Rock Steady Crew. Also included is a premium die-cut Style Wars sticker, Style Wars postcard and a custom Style Wars garment tag. This special bundle is a must have for serious Hip-Hop heads and fans of the iconic film. As the great Iz The Wiz proclaimed in Style Wars, "This is it!"