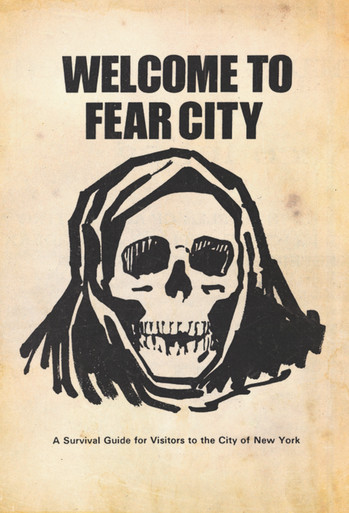 In 1975, the city of New York had roughly 85,000 robberies. Welcome to Fear City: A Survival Guide for Visitors to the City of New York (1975) was published by the Council for Public Safety—police, firefighters and other unions. New York City was in dire financial straits and Mayor Abraham Beame had proposed heavy cuts in municipal services. The pamphlet—with a skull on the cover—was aimed to discourage tourists from visiting New York City. The pamphlet had received such negative publicity that it was not distributed, although the unions distributed other pamphlets to get their message out. Negative nicknames for New York City during this economic crisis period included “Default City,” “Fear City” (by the police and fire unions), “Stink City” (sanitation unions), and “Stupid City” (teachers unions). This was the Rotten Apple back in the day, folks, and you either hated it, or absolutely loved it. We memorialize this once scaremongering pamphlet with our collectible Fear City postcard. Utilizing original artwork and text, this 4" x 6" throwback is printed on premium card stock with a satin matte finish for a vintage look and feel. Here are some of the tips included in the original pamphlet:

All prices are in USD. Copyright 2021 A THOUSAND WORDS. Sitemap | Shopping Cart Software by BigCommerce