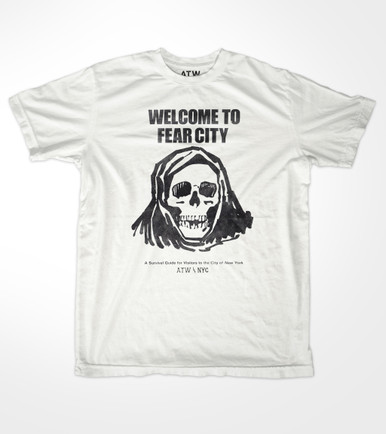 In 1975, the city of New York had roughly 85,000 robberies. "Welcome to Fear City: A Survival Guide for Visitors to the City of New York (1975)" was published by the Council for Public Safety—police, firefighters and other unions. New York City was in dire financial straits and Mayor Abraham Beame had proposed heavy cuts in municipal services. The pamphlet—with a skull on the cover—was aimed to discourage tourists from visiting New York City. The pamphlet had received such negative publicity that it was not distributed, although the unions distributed other pamphlets to get their message out. Negative nicknames for New York City during this economic crisis period included “Default City,” “Fear City” (by the police and fire unions), “Stink City” (sanitation unions), and “Stupid City” (teachers unions). This was the Rotten Apple back in the day, folks, and you either hated it, or absolutely loved it. We memorialize this once scaremongering pamphlet with our exclusive, Fear City t-shirt set. Utilizing artwork and text from the original pamphlet, this premium, throwback tee features front and back graphics in a distressed aesthetic for a truly vintage look and feel and comes complete with a collectible 4" x 6" Fear City postcard and 4" die cut sticker.

Fear City: New York vs The Mafia | Official Trailer | Netflix (02:43)
In the 70s, New York was owned by the Mob. From the producers of Don't F**k With Cats, comes the inside story of the rise and fall of New York’s most powerful Mafia families and the end of the golden era of the Mob. With the full might of the FBI and an army of undercover agents, witness the bugging, the investigation, and the era-defining conclusion of the historic Mafia Commission Trial that changed everything. Watch Fear City: New York vs The Mafia, only on Netflix: https://netflix.com/fearcity SUBSCRIBE: http://bit.ly/29qBUt7 About Netflix: Netflix is the world's leading streaming entertainment service with 183 million paid memberships in over 190 countries enjoying TV series, documentaries and feature films across a wide variety of genres and languages. Members can watch as much as they want, anytime, anywhere, on any internet-connected screen. Members can play, pause and resume watching, all without commercials or commitments. Fear City: New York vs The Mafia | Official Trailer | Netflix https://youtube.com/Netflix Five Mafia families ruled New York with a bloody fist in the 1970s and '80s, until a group of federal agents tried the unthinkable: taking them down.